As much as football has been in the news lately, either in the form of concussion lawsuits or the Sandusky story, it never occured to me that head injuries could be related to the sexual scandal at Penn State.  An article in the Atlantic has corrected my perceptions: there is likely a link between sexual disfunction and head injuries. 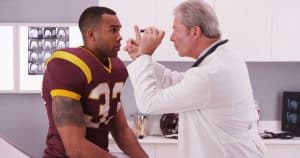 CTE is a progressive decaying of the brain that can only be diagnosed conclusively in an autopsy.  Many of the players who have been suing the NFL have the symptoms of the disease: depression and dementia.  We also know now that it is not only NFL players who are at risk, but anyone who receives blows to the head, including young children.

But the other effects of brain injury are just as scary.  Brain injury has been associated with other dysfunctions, such as ALS, and now it seems that there is a connection between pedophilia and head injuries during childhood.

In a 2003 study from the Archives of Sexual Behavior, it was found that “pedophilic patients reported more head injuries before age 13 than did the nonpedophilic patients.”   This is not to say that Sandusky’s pedophilia was caused by his head injuries, nor does it in any way absolve him from the horrors of his crimes, but it is true that NCAA and NFL players and coaches are likely to have a lifelong history of getting concussions.

Last year, a study from the Journal of Sexual Medicine reported on men who had acquired pedophilic behavior because of brain disease.

What does this mean?

Will getting a head injury cause you to become a pedophile?  No, not by a long shot.  It does add to the growing body of knowledge and medical consensus that even mild brain injuries can cause complex and lasting damage.  That the NCAA came down so hard on Penn State for their sexual scandal is a good thing, but let us hope that the NFL will follow suit and really press for a game much safer from head injuries.