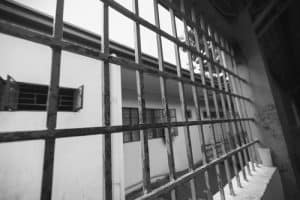 After surveillance video showed a 16-year veteran of the Denver police force placed his knee across a female inmate’s neck until she passed out, the officer was fired for “egregiously disproportionate” or excessive force.

Former officer James Medina was shown in a surveillance video from July 2014 in which he entered the cell of suspect Seryina Trujillo, who was accused of resisting arrest and assaulting a police officer, and placed his knee across her neck to restrain her. In the video, she appears to go limp and slides off the bench in her holding cell. Medina did not seek medical help after Trujillo passed out, according to reports.

Medina was fired for the excessive force incident, the situation was investigated. The Denver Police Department said in a statement that he “violated several departmental rules and regulations.”

“The level of force he used … was egregiously disproportionate and placed Ms. Trujillo at great risk of serious bodily injury or death,” his termination letter said. “There are no significant mitigating factors present to warrant anything other than the presumptive penalty of termination.”

According to Medina’s termination report, he and a female police officer were attempting to take an intoxicated man into custody when Trujillo interfered. When she was arrested, according to the police report, she spat in the female officer’s face and kicked Medina as she was placed in his patrol car. When she arrived at the police station, she refused to remove her shoes and belt, which is part of arrest protocol, which was when Medina forced her to comply, leading to the excessive force incident.

“She was biting, kicking and clawing, and my client was the one with open wounds,” Medina’s attorney said in a statement. He argued that there was “absolutely no basis” for Medina to have been fired because he did not, in fact, use excessive force, but an appropriate amount of force to restrain an uncooperative and dangerous suspect.

Situations which may give rise to a South Carolina police brutality or excessive force case include: