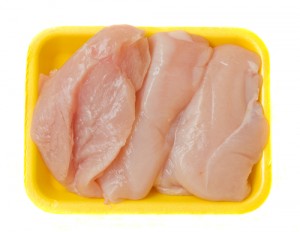 A massive outbreak of salmonella has caused 278 people across 18 states to become ill, according to an announcement from the US Department of Agriculture on Monday, October 7th. So far, 33 people have been hospitalized due to the severity of their infection. However, so far there have been no food recalls issued from the manufacturer or a government agency.

Foster Farms, according to the USDA, is the reported source of the salmonella-contaminated raw chicken. The strain, according to the government agency, is most likely salmonella Heidelberg, which caused a similar outbreak in Oregon and Washington State in 2012, sickening 134 people in 13 states total. Most of the contaminated raw chicken has been sold on the West Coast – California, Oregon, and Washington. So far, most of the salmonella illnesses have occurred in California.

However, the USDA’s news release says that no food recall has been issued yet because their Food Safety and Inspection Service “is unable to link the illnesses to a specific product and a specific production period.” Consumers can identify products that came from one of the three potential contaminating plants by looking for the packaging codes: P6137; P6137A and P7632.

Foster Farms says that they are working with the USDA as well as federal inspectors from the Centers for Disease Control and Prevention to address the salmonella outbreak. In its statement, the company says it has “instituted a number of additional food safety practices, processes and technology throughout company facilities that have already proven effective in controlling salmonella in its Pacific Northwest operations earlier this year.”

The USDA says that their inspection process has not been affected by the government shutdown. However, CDC disease detectives who would otherwise track the illness are currently not on the job, and that could affect the overall investigation.

Salmonella Heidelberg is a common strain of salmonella, which can cause serious illness in those with weak or compromised immune systems such as children, the elderly, or those with cancer or HIV infection. In the general population, salmonella infection can cause chills, headache, nausea, cramps, and fever starting about 8 hours after consumption, and symptoms can last for up to a week.

Every year, thousands of consumers catch serious illnesses from food-borne pathogens, including salmonella, listeria, and E. coli. Unsafe manufacturing techniques, poorly-cleaned processing equipment, unwashed hands, imported foods, and cross-contamination have all led to food recalls of products in the last several years. Sometimes, the food recall comes too late, and consumers because perilously ill, and even die, because of food-borne pathogens.

Consumers that have been harmed by defective products such as food, drugs, medical devices, or other products, may be eligible to receive legal remedies. Such legal remedies, or damages, may include compensation for medical expenses, lost wages, loss of physical capacity, pain, suffering, and mental anguish. Punitive damages are also available in many jurisdictions to punish defendants in those cases involving particularly egregious conduct which demonstrates a reckless or wanton disregard for the safety of the public.

Many manufacturers do their best to produce high-quality food, medical, and recreational equipment. However, some companies do not pay close enough attention to the manufacturing process, and can release products on the market that cause great personal injury. While the FDA and USDA issue product and food recalls on a regular basis, they do not always catch defects in time to prevent consumers from coming to harm, especially in food-borne outbreaks such as listeria, e. Coli, and salmonella. It is important to hold manufacturers to a higher standard, and a defective products lawyer can help when a food recall has not been issued in time. The Columbia, South Carolina-based attorneys at the Strom Law Firm are licensed to practice in South Carolina, Georgia, and New York, to help you with your personal injury or defective product claim. We offer free consultations to discuss the facts of your case, so contact us today for help. 803.252.4800.