One Myrtle Beach dog is living proof of the saying, “Man’s Best Friend”.

According to ABC News, A three-year-old black Labrador dog named Bucky traveled 500 miles from Virginia to Myrtle Beach in hopes of reuniting with his owner. 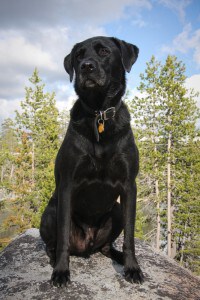 Bucky’s owner, Mark Wessells, took Bucky to live with his father in Winchester, Va after learning the place Wessell lived in Myrtle did not allow dogs. Leaving Bucky in Virginia was not easy for Wessell or Bucky. In fact, Bucky rejected the situation altogether and set out on his journey to reunite with his owner.

It is not known exactly how long it took Bucky to get back to Myrtle Beach or even how he exactly got there, but Bucky appeared in a “Carolina Forest” neighborhood near Myrtle Beach one night two weeks ago.

Brett Gallagher found Bucky wondering through his “Carolina Forest” neighborhood while walking his dog at 2 a.m. one night. Gallagher noticed Bucky got along well with his yellow lab, Hannah. Gallagher took Bucky into his home and provided nourishment for the emaciated dog.

Gallagher searched on Craigslist hoping to find an ad that described the missing dog, but found nothing. Gallagher decided to take Bucky to the vet to get a full physical done. During the examination, Dr. Amanda Thomas found a microchip inside Bucky revealing his identity. The microchip contained Bucky’s name and the phone number of his owner.

Gallagher recalls the moment Dr. Thomas discovered Bucky’s identity. “He was going nuts when the vet called him by his real name. His ears went right up,” Gallagher states.

Dr. Thomas’ office contacted Bucky’s owner to let him know of the discovery. When Wessell heard the news, he rushed to the animal hospital to reunite with Bucky.

Because Bucky can’t talk, the details of how he managed to travel 500 miles will probably forever remain a mystery.  If Bucky could talk, he would probably have a lot to say about his journey and his feelings now that he is home. Dr. Thomas credits Bucky’s keen sense of smell in assisting him in his journey. This keen sense of smell was evident when Bucky arrived home. As Lexie Grant from Grand Strand Animal Hospital states, “he was rolling all around. He was laying in all of his blankets just soaking up his smell.”