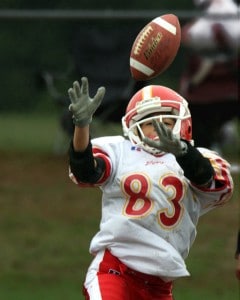 The number of young men signing up to play youth football is dropping and local administrators think that this is because of the headlines surrounding the NFL concussion lawsuits.  Stories of concussions, amnesia, brain damage, and depression are scaring parents away from signing up their sons for football.

The Minnesota Star Tribune covered this story last week and spoke to local youth football president Jay Hansen.  Hansen estimates that there has been a 20 percent drop in signups in the association which boasts 800 players.  Even in areas that have recently won state championships, signups are down.

Two years ago, the association replaced 650 helmets throughout the league and now has emergency medical technicians at all games.  Hansen feels like the concerns are overblown and the fault of the media hype about the NFL concussion lawsuits.  The worst part is that the entry-level team of third-graders has the largest drop-offs of all.  Meaning that they aren’t just losing players, they’re losing future players as well.

Nationally, the statistics aren’t much better.  According to the National Sporting Goods Association, football participation in all age groups has dropped from 10.1 million in 2006 ro 9 million in 2011.The statistics are similar nationally.  The National Federation of State High School Associations says that the number of boys playing high school ball dropped in 2010 and 2011, after having grown for 16 years straight.

Some parents are pulling their children out after they receive concussions, worried about the longterm damage.  And people are making a lot of money off of this fear as well.  Mouth pieces, helmet covers, and even orthopedic doctors are all trying to get in on the concussion prevention and treatment game.

Coaches and associations want people to remember that youth football is not the same thing as the NFL.  The players are smaller, the play is less rough.  And the parents’ concerns mean that safety takes priority over profit.

But the question remains, is football safe enough for young people to be playing it?  Professional players are adults and might be able to take on the risks knowingly, but what about 9 year olds?  The game may have to change.