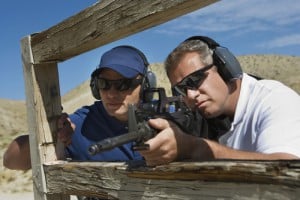 Daytona Beach commissioners have given permission to a local gun range to get an alcohol beverage license, open a restaurant, and serve booze to patrons who are legal drinking age.

The commissioners approved the measure on Wednesday, August 19th, allowing the 12-lane gun range to open a restaurant, which includes the ability of the establishment to serve alcohol to patrons. Alcohol and guns do not mix, a concern raised by the group before the vote, but the measure passed anyway.

The restaurant is part of the Volusia Top Gun shooting range’s plan to keep the guns and gin away from each other, the facility told reporters when it first applied for the alcohol beverage and restaurant license in June.

“To the critics I say, you’re right. I’m not trying to mix the two. I’m trying to give you a nice meal before you go home. If you choose to have an alcoholic beverage and go home, that’s on you. It’s no different than them leaving here and going to Outback,” owner Ron Perkinson said.

“Safety is obviously key and number one for not only me, but everyone else there. Everything is going to be revolved around safety,” he added. Perkinson argued that the restaurant couldn’t be profitable without the ability to serve at least beer and wine.

Volusia proposed more restrictions in order to keep patrons from hurting themselves or others while intoxicated with guns, including:

“I firmly believe it will be safer than any restaurant in Florida,” Perkinson added.

As of February 2014, South Carolina residents with proper concealed carry licenses may take their firearms into bars or restaurants, as long as they do not consume any alcohol while they have the weapon on their person. Owners of these establishments may, according to their individual preferences, ban firearms on their property to keep people from drinking while carrying a weapon.

However, gun ranges in the state cannot apply for alcohol beverage licenses, and by state law they do not allow patrons to bring alcoholic beverages into the range or even onto the premises. In fact, it is also still unlawful for an alcoholic or other drug addict to possess a firearm for any reason, whether they had a concealed carry permit or not. And, of course, it is illegal in the state, as it is in many states, to be intoxicated on alcohol or other substances while using a firearm.