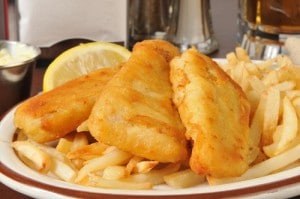 A man from Friendship, Wisconsin on his 10th DUI arrest tried to blame the smell of alcohol on his breath on having just eaten beer-battered fish.

John H. Przybyla, 75 years old, has been charged with 10 DUI infractions in Wisconsin. He was in court on Wednesday, January 21st, for a hearing regarding the DUI charges, which arose after being pulled over on suspicion of DUI on October 12th, 2014.

According to police reports, on October 12th, around 2:27 PM, an Adams County deputy saw Przybyla’s vehicle make a U-Turn on Highway 13. Because the vehicle had a broken tail light, the deputy followed the vehicle and pulled him over. When the deputy ran Przybyla’s license plate information, however, he found that the suspect’s driver’s license had been revoked due to previous DUI charges.

Then, as the deputy continued to follow Przybyla’s vehicle, he saw the vehicle cross over the center line. That was when he turned on his blue lights and stopped the suspect.

When the deputy approached the vehicle, he said he smelled the odor of alcohol coming off the suspect, and began to suspect yet another DUI. He also saw an open container of beer in the car. He asked Przybyla how much he had had to drink, and the suspect replied instead that he had not been drinking, and instead had been at a fish fry which had beer-battered fish near Highway 82.

Because of Przybyla’s history of DUIs, the deputy took him to a local hospital, where Przybyla refused to take a blood test, claiming it was against his religion. The deputy got a warrant and took a blood test, which showed that Przybyla had a blood alcohol content (BAC) of 0.062. Although most states have the legal blood alcohol limit at 0.08, in Wisconsin, the limit is 0.02 for those who have 3 or more DUI convictions in the past.

As of October, 2014, Emma’s law requires installation of an ignition interlock device for certain DUI convictions.

If you have been pulled over on suspicion of DUI and you participated in a field sobriety test which resulted in SC DUI charges, we are here to help. Conveniently located in Columbia, our South Carolina DUI attorneys offer a free consultation to discuss your legal rights as well as how to proceed.  Give us a call today to learn more about how we can help. 803.252.4800