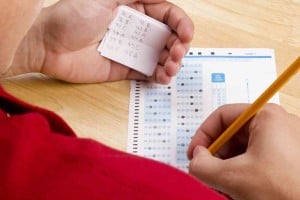 On Tuesday, April 2nd, 35 educators were to report to the Fulton County Jail after being indicted as major players in the now infamous Atlanta Cheating Scandal. As of 10 PM, 27 had turned themselves in.

Last week, a Fulton County grand jury indicted 35 educators, including teachers, testing coordinators, and principals. Hundreds of others were involved in the Atlanta cheating scandal. The 35 key players were indicted on federal criminal charges of racketeering, theft by taking, and making false statements.

For at least four years – 2005 to 2009 – educators across Atlanta altered test scores and answers on standardized tests to make the school district appear to rapidly improve. At the center of the Atlanta cheating scandal was school superintendent Beverly Hall, who was named National Superintendent of the Year in 2009 for the incredible improvements in her urban school district.

Cheating potentially dates back to as early as 2001.

Hall, who was the superintendent from 1999 to 2011, was accused in the indictment of placing unreasonable goals on educators in her district, and “protected and rewarded those who achieved targets by cheating.” Allegedly, she fired principals, and “ignored suspicious test score gains” throughout the district.

“For example, teachers who reported other teachers who cheated were terminated, while teachers who were caught cheating were only suspended,” the indictment alleges.

The indictment alleges that Hall promoted cheating, at all costs, for financial gain. “It is further part of the conspiracy and endeavor that targets achieved through cheating were used by Beverly Hall to obtain substantial performance bonuses.”

Hall was originally held on $7.5 million bond, which has since been reduced to $200,000. Other major players in the Atlanta cheating scandal include Donald Bullock, a testing coordinator for Usher/Collier Heights Elementary school; Theresia Copeland, a testing coordinator at Benteen Elementary; and Gregory Reid, an assistant principal of Parks Middle School. Their bonds were each $1 million.

If convicted for the racketeering, theft, and false statements charges, Hall faces up to 45 years in prison.

The Backstory of the Atlanta Cheating Scandal

In 2011, the Atlanta Journal-Constitution reported suspicions of cheating in a series of articles, which made the urban school district appear to make rapid and impressive improvements on national test scores. The reports launched a state investigation into Hall’s school district, which uncovered an incredible ring of cheating that occurred at 44 Atlanta schools, perpetrated by 178 educators, including 38 principals.

“We’ve had cheating all up and down the line. It was absolutely amazing,” said Michael Bowers, a former Georgia attorney general who investigated the cheating scandal. Bowers said his investigation found “erasure parties,” in which educators – both in school and outside of school – erased and changed test answers to make their students appear smarter. Teachers were even told to make changes to tests. “Anything that you can imagine that could involve cheating, it was done,” he said.

So far 150 of the implicated educators have resigned, retired early, or lost appeals to keep their jobs. However, 21 have been reinstated, and 3 await appeals at a disciplinary tribunal.

Bowers said that the teachers involved cheated for a variety of reasons – some out of pride, some to earn bonuses, but many cheated out of fear of losing their jobs.

“Not only were the children deprived, a lot of teachers were forced into cheating, forced into criminal acts,” Bowers said. “Now, granted, they did wrong, but a lot of them did this to protect jobs.”

Hall denies her involvement in the scandal, and has since investigations began. In 2011, she told the New York Times that she knew about cheating among her subordinates, and allowed it to happen, but she did not encourage it.

The educators involved in the Atlanta Cheating Scandal have been indicted on RICO charges, which stands for “Racketeer Influenced and Corrupt Organizations Act.” The act gives states the power to go after criminals who have been accused of racketeering.

Given the possible consequences at stake, it is critical that you contact a RICO defense attorney who can protect your rights and provide you an aggressive and well planned defense. Contact the criminal defense attorneys at the Strom Law Firm, LLC for a free consultation to discuss the facts of your case. 803.252.4800