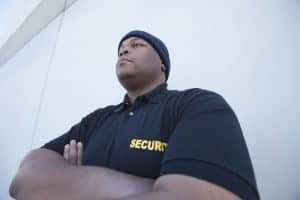 Police brutality and excessive force have dominated US headlines since the August death of Mike Brown in Ferguson, Missouri. However, another group of enforcement agents can be a source of deadly or excessive force.  Unfortunately, they are not subject to the same professional licensing or training standards as police officers: armed private security guards.

Armed security guards often look like police, with dark blue or black uniforms, firearms in hip holsters, and shiny metal badges on their chests. But these private security guards can receive professional licenses in their fields with hardly any training or regulation at all in most states, which can have deadly consequences.

For example, on June 1st, 2012, an armed security guard named Lukace Kendle was working at Club Lexx in Miami. Kendle said two African American youths who were going to the club threatened him, so he shot them both; in court, the surviving victim, who is paralyzed from the waist down, said that Kendle rushed them, and although they followed his directions, Kendle shot both victims.

On his professional license application, Kendle reportedly disclosed that he had a criminal history, but he failed to disclose that he had a history of alcoholism. During his murder trial, psychologists diagnosed him with several disorders, from impulse control disorder to schizophrenia spectrum with narcissistic and antisocial features. His alcoholism had led to his discharge from the Navy, and he had also reportedly had problems with a crack cocaine addiction. Federal law prohibits convicted criminals and those who have been committed to mental health institutions from owning or possessing firearms, but although Kendle had both on his record, the private security firm that hired him failed to do proper background checks for his professional license.

There are no federal training standards for armed security guards to receive professional licenses.

The Strom Law Firm Professional License Defense Attorneys represents clients throughout South Carolina who are encountering challenges relating to a contractor, business or professional license. We will represent you during the investigative stage, in settlement, negotiation, and the formal Administrative Law hearing. The Strom Law Firm offers a free consultation to anyone considering hiring private counsel to defend their South Carolina Professional License. 803.252.480