Beef Jerky Bandit: What a Jerk! 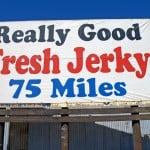 According to the Huff Post, the bandit’s profile includes a love for dried meat,  is a master of disguise, and drives a convertible.

A surveillance video shows the wig-wearing Beef Jerky Bandit smashing into Mike’s Jerky in Albuquerque, NM and leaving with some of Mike’s product.

In the surveillance video, the suspects pull up to Mike’s Jerky on August 20 around 2 a.m. He then throws a brick into the store, allowing himself access. The Beef Jerky Bandit perused Michael Grier’s beef jerky selection consisting of 20 or so flavors. According to Grier, the Beef Jerky Bandit seemed to focus his attention on Mike’s new original bacon flavor.

Beef Jerky Bandit: Why did he do it?

The answer to that question remains to be seen. Some speculate he may be trying to deconstruct the product and sell the recipe. On the other hand, he could just have a hankering for a drier version of a BLT combining the bacon jerky with lettuce and tomato jerky. Another theory is the Beef Jerky Bandit loves Mike’s Jerky and just happened to grab the bacon-flavored jerky among other flavors.

Whatever the reason for the burglary, according to Men’s Health the Beef Jerky Bandit picked a “junk food that’s good for you”. The magazine states beef jerky “is high in protein and doesn’t raise your level of insulin—a hormone that signals your body to store fat.”

Tina Tanuz wrote on the store’s Facebook page, “I really hope someone recognizes (sic) that jerk who robbed your store! I saw it on the news tonight.”

It is not all bad news for Mike’s Jerky. On the company’s website they wrote, “Mike’s Jerky Just wanted to thank you all for your support and kind words and well wishes during our time of need!!”

The company states they are happy for the free publicity the burglar has brought them, stating in one post on Facebook, “Our story about the break-in made National News This Morning on CBS!!”

As for the future of Mike’s Jerky, Grier said the company recently installed bars to prevent future break-ins.

The Beef Jerky Bandit is still on the loose, but it looks like he will need to find a new place to get his jerky fix.

The lesson of this story is the next time you have a craving for beef jerky, don’t be a jerk, buy the jerky don’t steal it. If you do find yourself facing charges, you will need to contact a South Carolina criminal defense lawyer. The South Carolina criminal defense lawyers at the Strom Law Firm defend cases on both a state and federal level. Fill out our webform or call us today for a free consultation. 803.252.4800.