Early Symptoms of PTSD Linked to TBI in Veterans 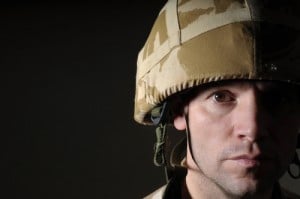 Traumatic brain injury, or TBI, is a common injury to soldiers and military veterans, often triggered as the result of a blast injury. Veterans benefits are often used to treat TBI, as well as mental and emotional disorders including post-traumatic stress disorder (PTSD) and depression.

Now, one study at the Washington University School of Medicine in St. Louis has linked early symptoms of PTSD to other, later disabilities such as TBI.

Early symptoms of PTSD include anxiety, flash-backs, and irritability. These emotional and mental markers of PTSD have also been linked to other forms of disability, including traumatic brain injury, according to the study.

“Symptoms of post-traumatic stress and depression have always been thought to develop months to years later,” said David L. Brody, M.D., Ph.D., associate professor of neurology. “We don’t know what causes these symptoms, whether they result from the brain injury itself, from the stress of war or some combination of factors. But regardless of their origin, the severity of these psychological symptoms soon after injury was the strongest predictor of later disability.”

The study’s researchers added that even mild concussions can have severe and long-lasting effects on the brain, more so than previously believed. TBI can lead to difficulties for veterans trying to return to their previous lives, including work, family, and social obligations.

A group of 38 veterans volunteered to receive assessments within a week of their original TBI or concussion incident, followed by standard 6 to 12 month follow-ups. Veterans with mild traumatic brain injuries were, in 63% of the cases, classified as moderately disabled in later assessments, meaning they were unable to return to their regular lives and work.

The remaining 37% of the group were considered to have a good recovery.

“Most previous studies have hypothesized that things such as duration of loss of consciousness, duration of post-traumatic amnesia and how well patients could perform tasks of thinking, memory, attention, balance and coordination would be the predictors of later disability,” Brody said. “We looked at these factors. And they were not strongly correlated with how well patients did long term.”

Although the study’s authors said the TBI findings were absolutely applicable to civilians who suffer concussions or TBI, they added that “there may be unique aspects of military brain injury that are not true in the civilian world. It could also be that this is a general phenomenon that has not been carefully addressed in civilian or military populations.”

The findings through early symptoms of PTSD could change how veterans benefits are determined and awarded, or how long a veteran may be considered temporarily disabled. Disability determinations can affect medical and financial veterans benefits.

If you are a veteran of the US military, especially if you have suffered disability that affects your ability to work and socialize, you could qualify for a variety of veterans benefits. However, the application process can be complex, and you could be denied your benefits, or receive a disability rating that is too low. The South Carolina Veterans Benefits attorneys at the Strom Law Firm understand the intricacies of applying for veterans benefits, and can help you begin the process with a free consultation. Contact us today. 803.252.4800