Exploding gas can lawsuits forced the nation’s largest manufacturer of gas cans to close its doors.

Gas Can Company Files for Bankruptcy 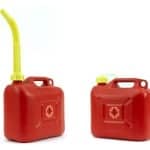 Blitz filed for Chapter 11 bankruptcy November 9, 2011. The company faced 42 lawsuits before filing for bankruptcy. According to FOX23, one lawsuit settled for $5 million and another for $10 million, with 26 more lawsuits filed after the settlements.

Blitz was responsible for manufacturing a large portion of the nation’s gas cans. The company made 15 million gas cans each year and averaged three to seven lawsuits a year in 46 years of operation.

The company blames the lawsuits and bankruptcy on the lack of protection in the gasoline can industry. Attorneys representing victims who have suffered from exploding gas can injuries say the injuries were preventable had the company put a flame arrestor on the gas can. The company counters the argument by saying that there is no way to prove that a flame arrestor would prevent exploding gas can injuries.   The company states there is no device that makes it safe to pour gasoline on a fire.

The company that they feel they have taken adequate precautions by posting the dangers of having gasoline around a fire on the gas can.

Bills like the Children’s Gasoline Burn Prevention Act, which requires gas can manufacturers to install a childproof cap on the gas can, aim to monitor the gas can industry and help eliminate future lawsuits.

What you need to know about exploding gas cans

Blitz USA’s gas cans were not equipped with a flame arrestor. A flame arrestor is a thin wire mesh located in the gas can spout.  It acts as a safety device.  It allows the gas to exit, but prevents flames from igniting gasoline vapors inside the can. Explosions typically occur from exposing vapors from inside the can to a nearby open flame.

Gasoline can companies like Blitz USA, Inc., Midwest Can, Scepter Manufacturing and the Plastics Group, should have known about the dangers.  Professional grade gas cans have been equipped with flame arrestors and spring-activated caps, which close automatically and prevent vapors from escaping.

The pouring of gas on a fire on a fire is not the only way gas cans explode. With rising gas prices many people use gas cans to stock up on gas. Some people may place these gas cans in a truck bed or the back of the car. A simple spark from a truck latch or static electricity can ignite these gas cans causing them to explode

Gas can explosions can cause serious injuries including severe burns and even death. Burn injuries can lead to costly and time consuming rehabilitation leaving you out of work. Burn injuries can also leave lasting scars and disfigurement. Our burn injury lawyers at the Strom Law Firm will fight gas can manufacturers to get you the money you deserve for your injuries. Call us today for a free consultation to see how we can help you. 803.252.4800.