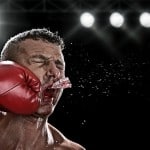 According to research done in Sweden by a former boxer working with a doctor, Olympic boxers fight even while still suffering from concussions.  Though injured, the chance at the gold in London is too great for them to protect their health instead of fighting.

Dr. Neselius of the Sahlgrenska Hospital in Goteburg reports that many amateur boxers return to the ring before they’ve fully recovered from their concussions.  Both male and female boxers were found to have high levels of a protein that shows they still were suffering the effects of brain damage.

Sanna Neselius, of Goteburg’s Sahlgrenska Hospital, told Reuters how tests had shown that, despite showing no symptoms, many amateur boxers were returning to the ring before full recovery.  Up to 80% of players have chemical evidence of brain damage, even when displaying no symptoms.  Dr. Neselius hopes that in the future there will be a simple blood test to see if a boxer, or any player of any sport, is suffering from brain injury or concussion.  He is concerned for the safety of those playing the sport, and those involved with other martial arts that have less stringent rules than boxing.

Boxers have to take part in up to six fights over the course of two weeks to have a chance to medal in the Olympics, meaning injured boxers have little recovery time should they sustain a head injury.  Even more troubling is the research that shows that getting a second concussion before fully recovering from the first can lead to severe brain damage.

The good news is that Olympic fights are shorter than professional boxing, a sport that, like Football, is known for having many players suffer concussions.

The TBI Lawyers at the Strom Law Firm are currently accepting cases involving brain damage and concussions. Call today for a free consultation. 803.252.4800