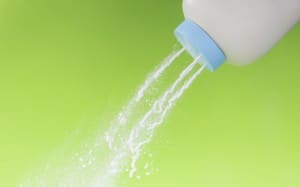 A personal injury lawsuit filed in a federal court in Trenton, New Jersey alleges that a woman died from ovarian cancer caused by her life-long use of talcum powder.

The talcum powder personal injury lawsuit was filed by the estate of Janice Chakalos, who died at age 63 in 2012 after battling ovarian cancer. Her family claims that the cancer was caused by Chakalos’ lifelong use of talcum powder, specifically the after-shower powders created by Johnson & Johnson.

The first link between talcum powder and ovarian cancer was reported in a study in 1971.

Since that time, a number of studies have established a connection:

A new study suggests that miners and manufacturers do not acknowledge how often talcum powder is contaminated with asbestos during the mining process, which can lead to cancer when using talcum powder-based bath products. “We have traced the asbestos in the talc to the mines from which it originated, into the milled grades, into the product, and finally into the lung and lymph nodes of the users of those products, including one woman who developed mesothelioma,” the study reported.

The talcum powder personal injury lawsuit alleges the companies failed to warn consumers of the dangers of their after-shower products, including the risk of cancer.

If you have been harmed, or a loved one has regularly used talcum powder and has since developed ovarian cancer, the attorneys at the Strom Law Firm can help. You may be entitled to compensation through a  talcum powder lawsuit. We offer free, confidential consultations to discuss the facts of your case, so contact us today. 803.252.4800.