US Soccer Federation Bans “Headers” for Youth 10 and Younger 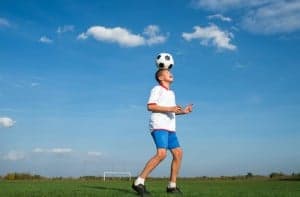 After a concussion lawsuit from 2014 was finally settled, the US Soccer Federation has released new guidelines for young players that should help prevent traumatic brain injuries later in life.

The group officially banned “headers” – hitting the soccer ball with the head instead of the feet – for soccer players 10 years old or younger. The federation also stated they would limit headers for players 11 to 13. The new safety regulations will be mandatory for US Soccer youth national teams and academies, which includes Major League Soccer youth clubs.

Other US soccer associations with youth leagues can use the new safety guidelines for their own standards, but if they are not associated with the US Soccer Federation directly, they will not be required to follow the new rules.

“What we’re establishing is creating parameters and guidelines with regards to the amount of exposure” to potential head injuries, George Chiampas, U.S. Soccer’s chief medical officer.

So far, the federation has not released any guidelines to prevent concussions and TBI among players older than age 13.

The rules include changes to substitution rules in soccer, which allow players who may have sustained a concussion to leave the field for longer. US Soccer said it would release the details of the new safety rules in the next 30 days.

On their website, the federation claims that the initiative behind studying and preventing youth concussions on the soccer field began before the lawsuit in 2014. However, the lawsuit – in which a group of parents and soccer players filed a joint case in California against FIFA, U.S. Soccer and the American Youth Soccer Organization asserting negligence in monitoring and diagnosing concussions – aimed to change soccer rules and regulations, and did not seek any financial compensation for medical bills or lost wages due to ongoing TBI problems.

“With the development of the youth concussion initiative by U.S. Soccer and its youth members, we feel we have accomplished our primary goal and, therefore, do not see any need to continue the pursuit of the litigation,” said an attorney involved in the 2014 case. The lawsuit stated that at least 50,000 high school soccer players sustained concussions in 2010 alone, which was far more than players involved in other sports like football, basketball, softball, and wrestling.

Despite the lawsuit’s focus on high school players – who are potentially gearing up for college soccer or professional games – the new rules do not yet say anything about 14-18 year old players. Instead, the focus is on very young players whose brains are still developing, and who may suffer the most from a traumatic brain injury or concussion. That said, any child aged 18 or younger can suffer personality changes, emotional disorders, and physical ailments if they suffer a serious enough concussion. It is important to diagnose concussions early and to make sure that the concussion is properly monitored and the player receives treatment.

The US Soccer Federation said that the new rules will also address other potential player safety issues like dehydration, heat stroke, and injury prevention.