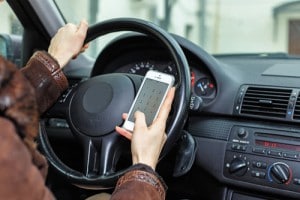 A mom from Wisconsin has officially been charged with three counts of homicide after a 2013 car accident, after she caused distracted driving deaths, which killed her 11 year old daughter and two 5 year old nieces.

She and her son survived the accident.

Kari J. Milberg, 34 years old, was allegedly checking Facebook on her phone when she caused the December 2013 distracted driving death accident. They were returning home from a day at The Giggle Factory Kids in Hudson, when the SUV spun out of control and into oncoming traffic. A truck struck the vehicle. Milberg’s daughter died instantly, and her two five year old nieces died in the hospital. Milberg herself was thrown from the car, because she was not wearing a seat belt, and was in a coma, but later recovered.

Cell phone records recovered during an investigation into the serious car accident showed officers that Milberg was sending and receiving Facebook messages on her phone up to two minutes before the crash, which led officers to believe she was committing distracted driving. A lengthy investigation followed, and Milberg now faces criminal charges – three counts of homicide by negligent operation of a vehicle, and one count of reckless driving.

“Driver distraction may explain why Milberg deviated from her southbound lane of travel to the outside shoulder before losing control,” according to the report.

Police also found prescription Oxycodone in Milberg’s purse, but a blood test revealed therapeutic levels of the painkiller, as well as a sedative called Midazolam in her system, so Milberg was not considered intoxicated at the time of the accident.

The truck driver and his two passengers were not injured in the accident, and they were not ticketed for their involvement.

The Dangers of Distracted Driving are Real and Serious

If you have been injured in a car crash, or a loved one has was involved in a distracted driving death caused by another driver, you do not have to suffer mounting medical bills, lost wages, temporary or permanent disability, or funeral costs alone. You may have a personal injury or wrongful case against the distracted driver. Distracted driving is illegal in South Carolina, especially if the driver is on social media or texting and driving, which causes the car accident. Contact the South Carolina personal injury and wrongful death attorneys at the Strom Law Firm for a free consultation today. 803.252.4800