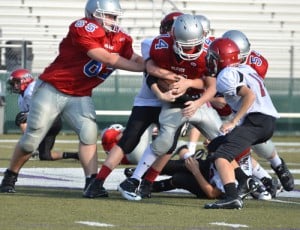 A Family Sues Youth Football League Pop Warner, a youth football league, after learning that their son had CTE – chronic traumatic encephalopathy – a degenerative brain disease caused by untreated traumatic brain injury, and which can lead to depression and suicide.

Joseph Chernach killed himself at age 25, in 2012. Chernach played youth football through Pop Warner for years of his childhood, which his family now claims in a lawsuit, filed on Thursday, February 5th, was the cause of his depression, because repeated, untreated traumatic brain injury, then chronic traumatic encephalopathy.

The Chernach family seeks at least $5 million in damages from Pop Warner, which they say in their lawsuit filing “knew or should have known that tackle football was dangerous for children and exposed children to head injuries, including dementia pugilistica,” which is a variant of CTE.

The complaint continued by stating that Pop Warner negligently failed to properly train its coaches, did not use the safest possible helmets, did not teach players to properly wear their helmets, and did not limit the amount of hitting in practice. The youth football league also failed to follow correct concussion and traumatic brain injury protocol according to new information gathered and published by medical professionals as early as 1997.

The lawsuit further states that Chernach appeared to be doing well for a short time after he stopped playing Pop Warner football. His freshman year at Central Michigan University was marked by good grades. However, his family stated that his sophomore year, Chernach’s personality began to change.

“From that point on his mood became progressively depressed and ultimately paranoid, distrusting his closes friends and family. … Joseph Chernach’s suicide was the ‘natural and probable consequence’ of the brain damage he suffered playing football.”

A lawsuit filed against the NFL for its negligence regarding player safety to prevent traumatic brain injury landed the former and current football players with millions of dollars to help with lifelong physical and emotional injury, and has also forced the NFL to change many of its policies regarding how long players play and how league-hired doctors handle concussions on the field.