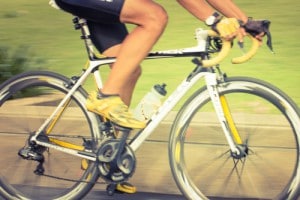 Trek will replace the quick release with a new one for free. The bicycle manufacturer has videos that explain how to properly adjust disc brakes on their website, as well as Trek owners’ manuals that are available for download.

“This recall involves all models of Trek bicycles from model years 2000 through 2015 equipped with front disc brakes and a black or silver quick-release lever on the front wheel hub that opens far enough to contact the disc brake,” read a statement from the Consumer Product Safety Commission.

Three serious accidents involving the disc brakes were reported to Trek and the CPSC, spurring the expansive safety recall. Two cyclists were seriously injured when their front wheels separated from their bike frames, resulting in injuries to the face and one broken wrist. A third cyclist was ejected over his handlebars, injuring himself so seriously that he is a permanent quadriplegic.

“We investigate every accident that’s reported back to us,” said Trek spokesman Eric Bjorling. “This would be the largest recall we have ever had.”

Because the problem is based on the brake system, which Trek purchases from another manufacturer, other bicycles could be affected by the safety recall later.

The Trek bicycle safety recall due to personal injury is serious because consumers might lack proper documentation for their disc brakes. While the manufacturer and bicycle repair shops both have stated that this is not a manufacturing defect in the lever, the issue is with a lack of knowledge, which is still the responsibility of the manufacturer of the product.

By law, a product can be considered “unreasonably dangerous” if there are inadequate instructions for proper use or inadequate safety warnings. Trek’s safety recall was, in large part, spurred on by this lack of knowledge. In light of the disc brake issue, Trek has offered replacement instructions for the brake system for free, both at Trek retailers and online, as well as safety videos.

If you or a loved one purchased a Trek bicycle with disc brakes and have suffered serious injuries, you should consider a personal injury lawsuit to help cover your medical bills and lost wages. The Strom Law Firm, L.L.C. understands product liability and personal injury law and will fight for compensation to help you heal. Contact us today for a free consultation. 803.252.4800

There is no drawback to consulting an experienced bicycle accident injury attorney. Our Columbia Bicycle Accident Lawyers will never charge for an initial consultation, and the lawyer will be able to help in assessing any legal rights to recover the financial compensation you may have. Our experienced bicycle accident lawyers are also important to serve as protection from insurance companies trying to contact you for a quick settlement.

Strom Law Firm is experienced in representing victims of bicycle accidents and other traffic accidents. Our bicycle accident lawyers are ready to meet with you in person at your convenience. You can also contact us online or by phone at (803)252-4800 to schedule a time to talk with a member of our team.

Sorry, no articles were found.