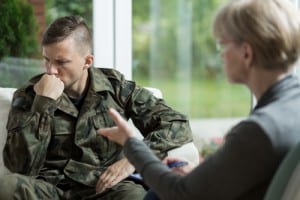 Each year, the Wounded Warrior Project releases data on war veterans, common problems experienced, and how veterans can be better helped. This year, the Wounded Warrior Project survey revealed that at least 75% of vets who served in post 9/11 wars – in Afghanistan and Iraq especially – suffered complications, particularly post-traumatic stress disorder and traumatic brain injuries.

“Our annual survey shows that this generation of injured veterans continue to struggle with the invisible wounds of war, including PTSD and TBI [traumatic brain injury], and the challenges are not getting better with time,” said Steve Nardizzi, chief executive officer of the Wounded Warrior Project.

A recent Pentagon study on the same group of veterans, who served in wars from 2001 to 2015, established that 300,000 vets, who served during this time period, suffered mental health issues and/or brain damage, with 8,000 veterans suffering traumatic brain injuries – one of the most serious types of brain injury.

Not surprisingly, the Wounded Warrior Project found that 1 in 3 veterans do not feel comfortable with the VA’s current resources and veterans benefits, especially when it comes to mental health.

“Year over year, the [survey] shows mental health issues are becoming more prevalent in veterans who served in Iraq and Afghanistan,” Nardizzi said. “Of greater concern, access to quality mental health care is not keeping up with the demand.”

He added that this year, the Wounded Warrior Project will launch a new program they call the Wounded Care Network. The program vows to connect veterans and their families to top-quality mental health care in a location convenient to the veteran.