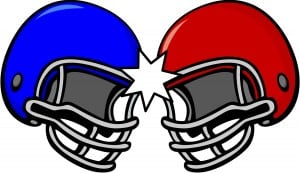 Even young athletes can be at risk for athletic concussions — if a child is playing sports, they are at risk.  Eight-year-old Cayden McCorkel played football in a youth league and, after a tackle, ended up with a concussion that went undiagnosed for hours.  When he complained of headaches and nausea, his mother got medical help.

He missed a week of school and still complains of headaches — a worry for a family that saw a bright athletic future for the boy.  They are allowing him to play again this season, but cannot help but be concerned for the danger he is in.  They both required a lot of convincing to allow him to play — but he’ll be pulled out if he gets another.

Cayden loves football.  He’s his team’s fastest player and is difficult to get off the field, and there is hope he will be a tailback or linebacker in the future.  His coaches assure his parents, they take concussions very seriously — no one is allowed back on the field without medical clearance.  They also say that what 8-year-olds can do to one another is nothing like what 350 pound professionals are doing to one another on the field.

After he was medically cleared last fall, he scored a touchdown in almost every game.  He won the big playoff for his team.  And yet, his parents are there on the sidelines, terrified and willing to pull him permanently if he suffers another brain injury.  And his mother knows that once you’ve had one concussion, you’re at greater risk for future concussions as well.

Cayden has fallen behind in his studies and required tutoring; his mother can’t prove that it’s related to the concussion, but she worries.  He still complains about the headaches.  Her fears are reasonable, but what is the correct way to deal with youth sports?  In a child as promising as Cayden, is it reasonable to pull him completely?

Personal injury such as concussions are difficult to diagnose, and even more difficult to prevent. If you believe your child has been injured due to negligence from a school, staff member, or athletic league, you may have a personal injury claim. The attorneys at Strom Law, LLC  can help. We offer free consultations, so contact us today. 803.252.4800.