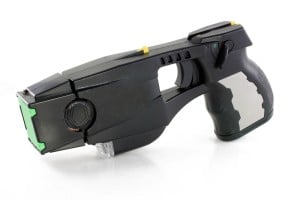 The South Carolina Law Enforcement Division (SLED) is investigating the death of a man from Kingstree, South Carolina, who was tasered multiple times for refusing to comply with officers.

The incident report from the Williamsburg County Sheriff’s Office states that South Carolina Highway Patrol officers were conducting a driver’s license checkpoint on Dennis Avenue near Highway 52 North, and at about 11 PM a white minivan approached from Eastland Avenue. Deputies reported that the van stopped about 20 feet from the officers at the checkpoint, so they shone a flashlight into the van to investigate. They saw a white male in the front passenger seat, and a black male in the driver’s seat, bent forward as though they were trying to hide something under their seats.

As officers approached the car, the driver, 29-year-old Carl Edward Ballard, drove the car away. Deputies yelled for him to stop, but he did not, so they got in their patrol vehicles with blue lights flashing and pursued.

Ballard stopped the car just short of Broad Swamp Road, and both men exited the vehicle. The passenger surrendered, but Ballard fled into the woods. Officers were able to catch Ballard during the foot chase when he fell once. He was ordered to stay down and put his hands behind him, but he got up and began running again. The trooper tasered Ballard from behind, causing him to fall down again. Officered ordered Ballard to “stay down and submit,” but he got up and started running again. After he entangled himself in vines and briars, the deputy was able to tackle him to the ground again.

According to the deputy, Ballard continued to resist, so the officer tasered Ballard in the back again. Ballard continued to fight back and knocked the officer away several times during the encounter, so the deputy reapplied the “drive stun” technique several times. The technique did not work, and several officers together were finally able to force Ballard’s hands behind his back, and take him to the patrol car.

The report states that Ballard was able to walk out of the woods, and was responsive in the patrol car for a time. Troopers immediately drove Ballard to a hospital, which took about 11 minutes. During that time, Ballard became quiet, and when they arrived at the hospital, he was unable to respond to questions. He later died.

The incident report makes no mention of illegal drugs or weapons at the scene, but Highway Patrol spokesmen said that troopers saw Ballard and his passenger throw items out of the windows during pursuit. However, no contraband was found along the road later.

The Strom Law Firm represents individuals facing criminal charges in Richland County and other counties around the state. We represent cases in both state and federal courts. Even misdemeanor offenses can carry stiff penalties including jail time. Do not wait until the verdict is in, call us today or fill out a confidential web form to see how we can help you. We understand what is stake that is why we will fight to clear your name of criminal charges. 803.252.4800.

Facebook
Twitter
LinkedIn
PrevPreviousDietary Supplements Make Up Half of Dangerous Drug Recalls in the US
NextMan Arrested on Criminal Charges for Mailing Ricin to President, SenatorNext