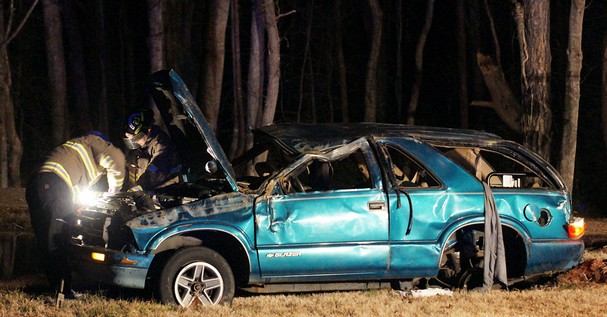 As reported by WYFF News 4, Jeffrey Goff Sr., 56, was killed in a Chevrolet rollover accident that occurred on Due West Highway known as S.C. 185 in Anderson County . The single car accident occurred shortly before 1 A.M. early Tuesday morning.

The 1995 Chevrolet Blazer was traveling eastbound when 26 year old Jeffrey Goff, Jr. lost control of the SUV. The SUV reportedly was driven off the right side of the road before returning to the road and flipping several times.

Two passengers were ejected from inside the vehicle during the roll over resulting in one death and Mr. Goff, Jr. being airlifted to the hospital with serious injuries.

Bobby Brown, 27, of Anderson, was taken by ambulance and is not believed to have sustained life-threatening injuries.

The state patrol is investigating the accident.

SUVS, including the Chevy Blazer, are a popular mode of transportation in today’s society. Many consumers drive an SUV intending to provide protection to themselves as well as their family in the event of an accident.

Despite placing our trust in these vehicles, studies have shown that the Chevy Blazer ranks among SUVs with the highest risk of rollover and increased risk of death or serious injury.

The problem with SUVs including the Blazer is that they have a high center of gravity and narrow track width which can make the auto unstable on the road and more likely to flip, even during a normal response where a driver is forced to change lanes quickly, swerve or otherwise respond to a road condition.

Manufacturers, including General Motors should be responsible for manufacturing vehicles, including SUVs equipped to respond to driving conditions including returning to the road after leaving the surface without threat of a roll over.

In the event of an accident, including a roll over, the Blazer is not equipped with roll over bars, roof crush protection, or even an adequate safety system. The image above, displays the crushed roof of the Blazer which could have contributed to, or even caused, the injuries sustained in the accident presenting the question of whether the injuries and death sustained in the accident could have been avoided.

Our thoughts are with the Goff family and the Brown family.