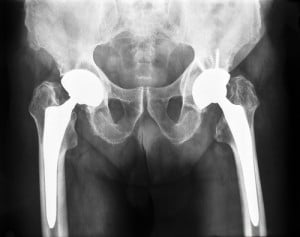 The verdict against plaintiff Kathleen Herlihy-Paoli was unanimous. Ms. Herlihy-Paoli received a Pinnacle all-metal hip replacement device in 2009, but soon afterward she returned to her physician with complaints about pain at the surgical site. Her surgeon determined that the pieces of the all-metal hip device were rubbing together, destroying tissue and dislodging metal fragments, which released flakes of metal into the plaintiff’s bloodstream. In April 2011 – just two years after Herlihy-Paoli received the all-metal hip replacement – her surgeon had to remove the device.

DePuy had argued that Herlihy-Paoli’s surgeons positioned the Pinnacle hip incorrectly, and that led to the pieces grinding against each other, damaging her surrounding tissue and leeching metal particles into her blood stream.

The bellwether case was used to gauge the potential outcome of all 6,600 personal injury cases against DePuy’s Pinnacle all-metal hip implant. However, this is just the first one to go to trial – more will follow, and the outcome for DePuy may not be favorable next time.

The orthopedic company settled around 8,000 personal injury cases in a multidistrict litigation (MDL) last year, which involved accusations of similar injuries from the company’s all-metal hip implant model ASR. The company offered $4 million, or about $250,000 per plaintiff.

Several recent medical studies have backed up claims that DePuy’s all-metal hip implants cause serious personal injury. The most recent came from the European Commission’s Scientific Committee on Emerging Newly Identified Health Risks (SCENIHR), which looked as thousands of patient files in European countries, and recommended that doctors and surgeons avoid using all-metal implants because of their injury and failure rate.