In South Carolina, if you are pulled over on suspicion of DUI, the officer may ask you to perform field sobriety tests.  The National Highway Traffic Safety Administration (NHTSA) has sanctioned three field sobriety tests to be used to determine if a person is driving under the influence: the horizontal gaze nystagmus (HGN), the one-leg stand and the walk-and-turn tests. Each of these are designed to help law enforcement gauge the relative sobriety or intoxication of a driver.

Do I Have the Right to Refuse the Field Sobriety Tests?

Yes, it is your right to refuse to perform these roadside test and refusing to perform the tests does not carry the same consequences as refusing to submit to a breath test.  Meaning, the refusal of these tests can not be used against you during the trial of your case.

If you are pulled over on suspicion of driving under the influence, field sobriety tests may be conducted by the officer.  These are not pass/fail tests, but rather clues that assist the officer in determining whether or not you are too impaired to safely operate a motor vehicle. The field sobriety tests are explained in further detail below.

What is the Horizontal Gaze Nystagmus (HGN) test?

“Horizontal Gaze Nystagmus” or HGN  is an involuntary jerking of the eye as it gazes towards the side. This jerking becomes noticeable when a person is impaired by drugs or alcohol. As a person’s blood alcohol concentration rises, the eyes will begin to jerk sooner as they move from side to side. In administering the HGN test, an officer asks the subject to follow a stimulus (usually the officer’s finger or a pen) as the officer moves the stimulus from side to side within her field of vision. The officer will instruct the subject not to move her head while following the stimulus with her eyes.  During this test, the officer looks for six distinct “clues” (3 clues per eyes) by performing these tests  to determine whether or not the subject is impaired.  The National Highway Traffic Safety Administration (NHTSA) states that if four or more clues are evident, it is likely that the subject’s blood alcohol concentration is above a .10.

What is the Walk and Turn test?

Like in the HGN test discussed above, the officer is looking for distinct “clues” of impairment.

The National Highway Traffic Safety Administration (NHTSA) says that research shows that if just two or more clues are evident, or the subject fails to complete this test, it is likely that the subject’s blood alcohol concentration is above a .10.

What is the One Leg Stand test? 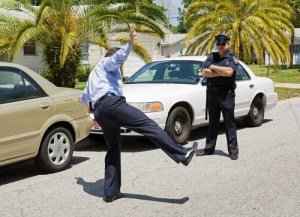 How is the One Leg Stand test scored?

Field sobriety tests are notoriously bad indicators of intoxication. Judging these tests is a highly subjective process, which has led to countless false DUI accusations.

If you’ve been arrested and charged with a DUI based on your performance during a field sobriety test that led to the accumulation of additional evidence against you, contact us for a no-cost, immediate case consultation.  During our initial consultation, we will help you determine if you should plead guilty or not guilty to your charge. Contact us today at 803-252-4800.